STARTTLS “offers a way to upgrade a plain text connection to an encrypted (TLS or SSL) connection” (Wikipedia) and, when it’s implemented on the MX SMTP server, it allows a STARTTLS-aware user’s outbound mail server to encrypt the traffic toward the recipient’s server.

For this test I used a small bash script that I fed with the same dataset that I already used for my IPv6 adoption in Italy post (whose updated – and almost unchanged – results can be found here).

On a total of 73 domain names, 106 unique MX records have been found; 31 of them support STARTTLS, covering 24 unique domains (11 MXes reported a connection error while 64 declared to not support STARTTLS). 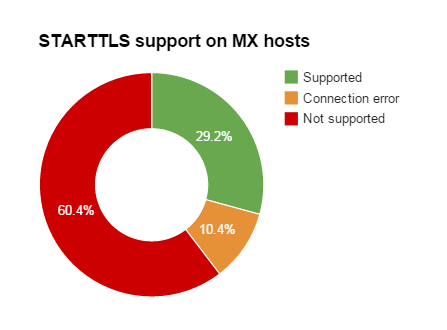 This is a comparison with similar data from some EU neighbors (national lavel domains taken from https://devpub.labs.nic.cz/ipv6-smt-new/country/): 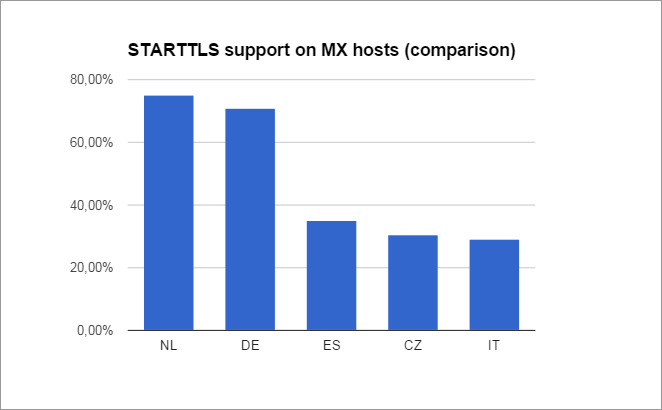 Among the 31 hosts which support STARTTLS, this is the distribution of certificates’ key size, verification results and SSL/TLS protocol support: 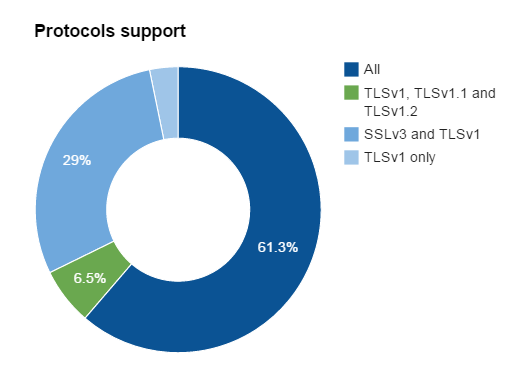 I didn’t go further into the analysis of ciphers or certificates issues because, in the current state, server-to-server (MTA-to-MTA) STARTTLS support is mostly used in opportunistic mode (that is, connections automatically fallback to unencrypted mode if remote party doesn’t offer it) and, primarily, it is advertised with in-band commands during the initial plain text SMTP setup: to perform a man-in-the-middle attack an attacker can simply strip the STARTTLS support from the initial dialog, instead of exploiting SSL/TLS weaknesses.

Some out-of-band solutions exist and they allow to securely determine whether the remote party is ready and willing to accept encrypted communications (DANE/DNSSEC for SMTP, STARTTLS Everywhere), but until they will be not widely deployed STARTTLS will just remain an opportunistic way to protect confidentiality and integrity of transmitted e-mails.

IMHO, even in an opportunistic-only scenario, a little effort might be spent to improve security of confidential communications such as those toward institutional bodies!